I recently saw a well-meaning Christian pastor, and other well-meaning White Evangelicals, post this quote from Morgan Freeman: 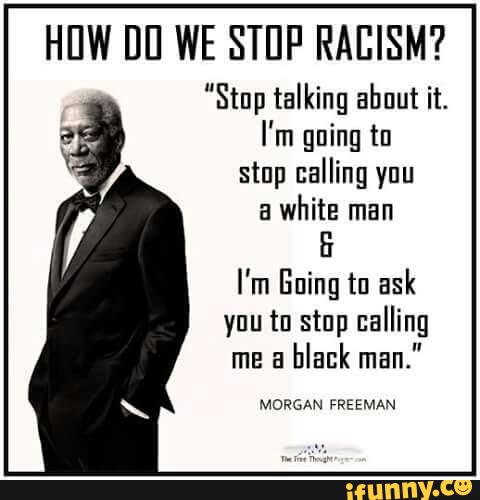 I know that the folks that posted that quote did so because they abhor racism. However, while on the surface it seems to be a helpful way to think about race, I believe that it is unhelpful for various reasons, that I ask you to prayerfully consider:

1. We certainly don’t want to judge or form opinions/perceptions of others based upon skin color. We just want to see people as people, made in God’s image. That’s a good sense of “colorblindness.” However, Scripture doesn’t tell us to deny the obvious, such as the color of a person’s skin. That sense of colorblindness is mistaken because it’s impossible, and it would cause us to willfully ignore the beautiful diversity that God created, which Scripture calls our attention to. Revelation 5:9 calls attention to ethnic distinctions (and by implication every conceivable shade of skin tone) when it says that Christ died for people “from every tribe and language and people and nation…” This comports with John 3:16: God so loved the world (i.e., people from every tribe, nation, etc., and thus every conceivable shade of skin) that He gave His only begotten Son, that whoever believes in Him might not perish, but have everlasting life.

Other texts could be cited, including texts that implicitly or explicitly refer to skin color. Implicitly there’s Num 12:1, where Moses’ wife is identified as a Cushite—an African woman. Explicitly there is Song of Songs 1:5 and 5:10; Jeremiah 13:23. The point is that we shouldn’t pretend that such physical traits don’t exist, but should see them as a testimony to the awe-inspiring creativity of our Creator, and the beautiful diversity that is found among the image bearers of God whom He has fearfully and wonderfully made. God has given humanity a stunning variety of beautiful hues, and our eyes should be wide opened to them and celebrate them.

One might appeal to Gal 3:28. However, that text doesn’t eliminate ethnic distinctions, any more than it is does male and female, etc. In Christ those ethnic, gender, and social distinctions can’t be used to wrongly elevate ourselves over others (or worse). We can’t assign inherent superiority or favoritism based on those things.

In Christ, those who sinfully divided on the basis of those God ordained distinctions are now joyously united in Christ, without eliminating the distinctions–God doesn’t change the color of our skin, ethnicity, gender, or even necessarily social class. Rather, our identity is not rooted in those things, but in Christ. We have been given a new ethnic identity—“the people of God” (1 Pet 2:9-11). This new ethnic identity doesn’t eliminate my personal ethnicity or cultural background “according to the flesh”, but redeems it. The apostle Paul was first and foremost a Christian—that was his identity. But, he didn’t stop being an ethnic Jew who cared deeply about his people according to the flesh (Rom 9:3). The same applies to all of us whatever our particular ethnic background.

All of this means that in Christ we have unity in our diversity because we are all united to Christ and to each other as one body and one family of God that is composed of Black, White, Brown, and every other conceivable color and ethnicity. How rich am I that I have brothers and sisters of every color and ethnicity from all over the world, and in Christ we are one!

Would anyone argue that not talking about those things would eliminate them? Of course not. We must talk about them, especially as Christians who are commanded to love our neighbor, and to work for justice and speak for the weak and vulnerable (Prov 31:8-9; Psalm 82:3-4).

Dear friends, here’s the reality: racism may not be what it once WAS, but make no mistake, it still IS. Because racism still is, and it is still found among some within the church and in the culture, we must talk about it.

In terms of the church, the fact that we haven’t talked about is a reason why some African Americans at times don’t feel welcome and are quietly leaving predominately White Evangelical churches. Mika Edmondson sums it up well: “Refusal to address racialized sin has undermined our capacity to fulfill our Romans 12:15 calling to “mourn with those who mourn.” The unique calling of the church…is not simply to tolerate one another, or even simply to understand one another, but to mourn with one another and bear one another’s burdens.”

While not intended, quotes like Mr. Freeman’s have the effect of rationalizing and justifying silence in our churches. Those who may struggle with racist attitudes are never encouraged to examine their hearts and repent. They are happy for us to stop talking about it, just as those who struggle with any other sin issue would be happy that we not talk about whatever their besetting is. If we refuse to talk about racism, we shouldn’t be surprised that such attitudes persist, and that our Black brothers and sisters stand stunned and grieved at the deafening and sinful silence—a silence that must end.

Again, I understand why some posted the quote. Praise the Lord, you want to see racial unity. But it’s going to take hard work, which of necessity means talking about it, and talking about it will be uncomfortable for everyone: White, Black, Hispanic, Asian, etc.

May the Lord grant us grace so that we move out of our comfort zones and walk in love toward our brothers and sisters of every race, resting in Christ who died for the sins of people from every conceivable background and rose from the dead to reconcile us to Himself, and to each other. May we by His Spirit strive to realize and maintain the unity in the bond of peace in our midst (Eph 4:23), and to see that unity spill out into the world as we proclaim not ourselves or human wisdom, but the gospel which alone has the power to save, and to bring true unity in the world. Amen.